By Jacquelin Carnegie
In August, many cities around the world empty out and all cultural activities come to a halt. But, during the dog days of summer, New York lives up to its reputation as "The City That Never Sleeps." Cool cultural and fun events never stop! Here's a sampling of not-to-be-missed happenings:

DANCE MOVES WITH A VIEW
Battery Dance Festival
Robert F. Wagner Jr. Park, Battery Park City batterydance.org (Aug)
Every August, this festival gives dance lovers a reason to rejoice. Wonderful international dance companies are showcased in the most beautiful setting in New York City! But, even if you know nothing about dance, it's worth checking out this festival as each night a selection of five dance troupes performs giving you the chance to discover that you're really a dance fan after all. Plus, the Statue of Liberty is in the background!

THE MUSIC PLAYS ON
All throughout the summer there are wonderful, free outdoor concerts featuring all kinds of music, but this one lasts until September: SummerStage
(www.summerstage.org; June thru Sept) This music fest has expanded beyond Rumsey Playfield in Central Park to 18 parks in all five boroughs. You'll hear cutting-edge music--everything from Indie to Afrobeat, Latin to Soul, Reggae to Fado, etc.--plus you'll see contemporary dance. All performances are free, except for benefit concerts. For jazz fans, there's the Charlie Parker Jazz Festival (Aug). 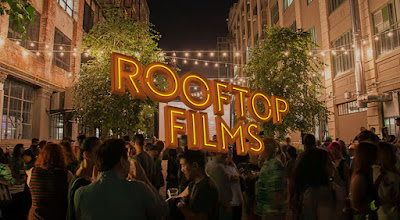 CINEMA SOIRÉES
Have a drive-in experience without a car! Check out all the lovely outdoor locations to watch movies under the stars in the middle of the city from Coney Island Flicks to Rooftop Films.

THE GREAT OUTDOORS IN THE CITY
Governors Island
New York Harbor, www.govisland.com
Open: May–October; Ferry fee, but free on the weekends before noon.
This glorious getaway, just 5 minutes from Manhattan Island by ferry, was for many years a base for the US Army and Coast Guard. But, the Island has been transformed into an artsy recreational area with lots of interesting events. A wonderful way to get away while staying right in the city. (Here are some other great ways to stay cool while sightseeing: https://bit.ly/30Dqnzy)

Posted by The Artsy Voyager at 9:57 PM