By Jacquelin Carnegie
Provence is truly a lovely region of France, but it's gotten a little too popular. To get an authentic experience of the area, it's best to visit off-season--early spring and/or late fall. The only exception would be to attend Avignon's famous festival, which takes place every year in July. But, instead of driving from place to place--on very busy French roads--and booking a different hotel every night, consider using Marseille as a base for visiting such towns as Aix-en-Provence, Avignon, and Arles--all easy day trips by train from Marseille's station, Gare St. Charles. Here are some town-by-town highlights:
AIX-EN-PROVENCE

www.aixenprovencetourism.com
Founded in 123 BC by Romans, Aix was the capital of Provence during the Middle Ages. In the 12th century, it became a center for arts and education. Famous Post-Impressionist painter Paul Cézanne was born here in 1839 and left his own compelling impression on the town. (Download "In Cézanne's Steps" brochure/map to visit related sites around town.)
Aix Walking Tours
The beautiful 17th & 18th century architecture in the Historic Center is stunning to look at, but it's even better when you know the history behind it. The Aix-en-Provence tourism office offers several daily, walking tours for a nominal fee, mostly in French but some in English.
Cézanne Atelier

9 Ave Paul Cézanne; Tel: +33 4 42 21 06 53; www.cezanne-en-provence.com
Open: Daily (Tour in English: 3:30pm or audio guide); Entrance fee, book in advance.
For any art lover, it's a special thrill to be in Paul Cézanne's studio space where he worked on several masterpieces between 1902-6. The studio was built from Cézanne's own plans. Today, there are changing exhibits and occasional special events.
Musée Granet
Place Saint Jean de Malte; Tel: +33 4 42 52 88 32; www.museegranet-aixenprovence.fr Open: Tues-Sun; Entrance fee.
This lovely museum, named for 18th-century, Provençal painter François-Marius Granet, has several Cézannes as well as French, Dutch, Flemish, and Italian paintings from the 16th to the 20th century. Discover Aix's origins in the archaeology exhibits.
AVIGNON

www.avignon-tourisme.com
In the 14th century, Avignon was the seat of the papacy. The stunning Gothic Popes' Palace (Palais des Papes) still dominates the city. Almost everyone has sung about Le Pont d'Avignon, the famous bridge that only goes halfway across the river, but you've got to come here to get a glimpse of it!
Festival d'Avignon
Palais des Papes & other venues; www.festival-avignon.com - (July)
This annual international, performing arts festival has been going strong since 1947. The mission is to present new and exciting work. Hence, many of the 50+ shows are created especially for the Festival or are being shown in France for the first time. The Honor Courtyard of the Palace of the Popes (Cour d'Honneur, Palais des Papes) is the Festival's main stage, along with several other historical, open-air venues. (While there are some free events, ticketed-shows & lodgings sell out early, so make your plans well in advance.) There's also an alternative festival, Avignon OFF, which takes place at the same time.
While the Les Luminessences d'Avignon light show is no longer on, a visit to the Palais des Papes (Palace of the Popes) and its stunning Honor Courtyard, full of centuries of fascinating history, is a must.
ARLES
www.arlestourisme.com
Founded in the 7th century BC, Arles was an important city during ancient, Roman, and Medieval times. Then, Vincent Van Gogh showed up in 1888 and turned it into a mecca for art lovers.
Van Gogh Walk
(Download "Arles & Van Gogh" brochure/map to visit 10 sites around town.)
Vincent Van Gogh came to Provence, attracted by the effect of the light on the landscape. He stayed in Arles from February 1888 to May 1889, producing hundreds of now-iconic drawings and paintings. Ten places where Van Gogh hung out and painted are marked by picture-plaques. While the yellow house he lived in no longer exists, almost every other spot--from the Place du Forum (Cafe at Night) to the Trinquetaille Bridge (Staircase of the Trinquetaille Bridge)---is remarkably unchanged.
SAINT RÉMY DE PROVENCE
www.saintremy-de-provence.com
This lovely place is one of the oldest towns in France where Nostradamus was born, Vincent Van Gogh came to recover in 1889, and Princess Caroline of Monaco has a house.
Saint-Paul de Mausole Asylum
Chemin Saint-Paul; Tel: +33 4 90 92 77 00; www.saintpauldemausole.fr
Open: Daily, March-Dec; Entrance fee.
In the spring of 1889, after his tumultuous time in Arles, Van Gogh voluntarily checked himself into this peaceful asylum with a beautiful, cloistered garden. In these serene surroundings, he was able to focus on his artwork and did 143 oil paintings and about 100 drawings over the course of the year. Some of his most iconic works such as Starry Night and Irises were painted here. For true fans, this is an incredible moving visit as everything is as it was--including the views painted--when Van Gogh was here.
Stay: Le Château des Alpilles (www.chateaudesalpilles.com) Saint Remy, nestled in the foothills of Les Alpilles, a small mountain range in Provence, is so delightful, it's worth spending the night here at the family-owned Château des Alpilles. Enjoy the hospitality, the grounds that once belonged to a 13th-century knight, and the pool. Dine on wonderful local specialties, including the most delicious honey (nectar des alpilles) you've ever tasted and marvelous wine from Château d'Estoublon.
VAISON LA ROMAINE 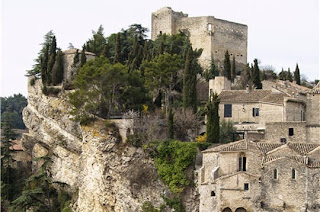 Vaison la Romaine has a fascinating history resulting in two distinctly different sections of town. The lower area, on the banks of the Ouvèze river, is a modern-day town with incredible Roman ruins, covering 35 acres, open to the public (Puymin & Villasse). By crossing an ancient bridge from the 1st-century AD, you reach the upper Haute Ville, the medieval part of town, high on a rocky cliff. Stroll by ancient stone houses on narrow, winding paths to reach the ruins of a feudal castle of the Count of Toulouse.
Stay: Le Beffroi (www.le-beffroi.fr) In the Haute Ville, two conjoined houses--one built for a marquis in the 17th century, the other for a count in the 16th--are now a cozy, 4th-generation run, family-owned hotel.
SANARY-SUR-MER 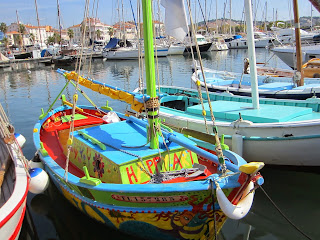 www.sanarysurmer.com
You'll find Sanary-sur-Mer to be a joyous surprise. This popular coastal resort on the Cote d'Azur is just an absolutely lovely, relaxing spot. The pretty town surrounds a palm-tree lined harbor anchored with colorful "pointus"--traditional Provençal fishing boats--and vintage, 19th-century vessels. Enjoy a drink at a harbor-front cafe or head to one of the popular bars or restaurants in Sanary's Old Town, a medieval area with winding streets leading to a 16th-century section. Throughout the year, there are a host of local festivities such as: La Fête de la Saint Pierre (Saint Peter's Day) - On the last Sunday in June, the town's maritime history is celebrated with a festival dedicated to the patron saint of fishermen. Sanary sous les Etoiles (July-Aug) - This is a summertime festival featuring music of all genres. A little known fact: Les Exilés - Between 1933 and 1944, Sanary-sur-Mer was a refuge for many German and Austrian Jewish writers, artists, and intellectuals fleeing Hitler, such as Thomas and Heinrich Mann, and Bertolt Brecht. There's a commemorative plaque of this period. Sanary-sur-Mer has the French honorarium of "ville fleurie"--a village in bloom!
Stay: Hotel Soleil et Jardin (www.sanary-hotel-soleiljardin.com) - A clean, centrally-located hotel with a very helpful, friendly staff. Or, rent a holiday home and live like a local; you won't want to leave!
Getting there: Most flights to Marseille from the US are connecting flights. Another option: Paris is just 3 hours away on the TGV fast train. A French rail pass from Rail Europe is very useful, including for day trips to other towns in Provence.
Making Your Trip Easier: If your schedule allows, I strongly recommend visiting the Provence region off-season; it gets really crowded during the summer months. There are Provence apps for Android or iPhones.
Posted by The Artsy Voyager at 1:34 AM