By Jacquelin Carnegie - (Paris, France)
Going on artists’ open studio visits is a great way to see interesting artwork and to get to know Paris. Because the Portes Ouvertes are organized by neighborhood (arrondissement), you can explore areas you might not be familiar with and get an inside peak into unique studio spaces and, sometimes, even an artist's home. The Open Studios (Portes Ouvertes) take place twice a year in spring and fall. Generally, work in all mediums is on exhibit: painting, photography, sculpture, woodworking, ceramics, mixed media, and video.
THE BEST PORTES OUVERTES IN PARIS
Each Portes Ouvertes location has Welcome Centers (points d’accueil) where you can get more information on the artists and pick up a map of the area's open studios. (Also, checkout each Portes Ouvertes' website beforehand for info and to download a map.)
Les Ateliers d'Artistes de Belleville (May)
Belleville: 19th arrondissement, with some sections in the 20th, 10th/11th
(Metro: Belleville or Jourdain) ateliers-artistes-belleville.fr
Belleville is a working class neighborhood with a large immigrant population, adding to its intrigue and diversity. There are some 250 artists and 20 collectives participating in the open studio visits.

Les Ateliers d'Artistes du Père Lachaise (May & Dec)
Père Lachaise: 20th arrondissement (Metro: Dumas or Avron) www.apla.fr/blog
The neighborhood is best known for the famous Père Lachaise Cemetery where the celebrated come to rest--Molière, Oscar Wilde, Jim Morrison, Chopin, Edith Piaf, and many other notables. About 40 "living" artists participate in the Portes Ouvertes and there's also a group show.
Portes Ouvertes - Les Frigos (May)
Les Frigos: 19 rue des Frigos; 13th arrondissement (Metro: Bibliothèque François Mitterrand) www.les-frigos.com
Les Frigos (The Refrigerators) is a building with studio spaces for about 200 eclectic artists. A former depot for trains carrying fresh produce into Paris, it's one of the only buildings to survive gentrification in this former industrial area on the Seine. Visit during the Portes Ouvertes or by appointment with a resident artist. The wonderful sculptor Jean-Paul Reti is the unofficial “mayor” of Les Frigos; if he’s not busy working on his art, he’s happy to explain the background of the building to visitors.
Portes Ouvertes - Portes d’Or (June)
Goutte d’Or: 18th arrondissement (Metro: Château Rouge or Barbès-Rochechouart) www.portesdor.com
The Goutte d’Or (drop of gold), east of Montmartre, is a working-class neighborhood where many North African immigrants live or come to shop, making for lively street scenes. Over 100 artists have studios here. Not to be missed is the work by José Cuneo, originally from Argentina, who makes marvelous, witty, 3-D light-boxes.
Portes Ouvertes des Ateliers de Ménilmontant (Sept)
Ménilmontant: 11th arrondissement (Metro: Ménilmontant or Place Gambetta)
www.ateliersdemenilmontant.org
Over 150 artistes open their studios in Ménilmontant, a hilly, working class area with cobblestone streets and old houses, bordered by Belleville and Père Lachaise. Famous singers Edith Piaf and Maurice Chevalier were born here; it's a fascinating area to discover.
STREET ART 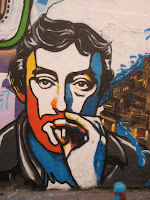 While the Portes Ouvertes happen at specific times of year, you can see fantastic street art whenever you're in Paris. Wander around on your own in the Belleville and Ménilmontant neighborhoods or take an informative, guided tour:
Paris Street Art Tours: There are a few street art tours via MeetUp such as those led by Kasia through the streets of the 11th & 20th arrondissements, and in Belleville and Montmartre. Since the art on the walls is constantly in flux, you can pass by every week and see something different as well as some enduring favorites.
Where To Stay: Paris is not only the City of Light, it's the city of fabulous art that will knock your socks off! Here are some equally interesting places to stay.

Posted by The Artsy Voyager at 9:53 PM